The late, great Angela Carter was an aficionado of radio drama.  She enlivened in it every bit as much as she re-energised the fairy story.  She writes, in her introduction to this collection: “It is the necessary open-endedness of the medium, the way the listener is invited into the narrative to contribute to it his or her own way of ‘seeing’ the voices and the sounds, the invisible beings and events, that gives radio story-telling its real third dimension…”

I like that phrase inordinately – “seeing the voices and the sounds.”  That is what the best radio drama  always requires and the average never quite does.

In consequence, Carter favoured a free-flowing dramatic structure in which the place can change just because we are told it has.  Character, however, remains constant, often the protagonist at the epicentre of some kaleidoscopic maelstrom which she or, more often he, controls to some extent.   We have strong narration to guide us through – the magnificent Puss himself in Puss in Boots, male and female uncharacterised narrators in the title piece, and Hero rather the title character in Vampirella.  The Company of Wolves is more layered and has various characters telling us their element of the story.  The three ‘fairy tales’, of course, also appear in Carter’s short stories; Puss and Wolves began in print and were ‘re-worked’ for radio; with Vampirella it was the other way round.

Come Unto These Yellow Sands is the key work here, a wholly original work for radio, an impressionistic evocation of the life and work of the Victorian painter Richard Dadd, who murdered his father and spent the rest of his life in Bedlam and Broadmoor.  What really captures the interest here is that the life and work are treated equally.  Dadd’s life, so far as the world was concerned, ended when he committed his act of parricide, but he continued to paint and the characters from his paintings – the fairy folk that obsessed him – come alive in his imagination.  We have Oberon and Titania, the Fairy Feller himself, and they speak rationally.  But all the time, in the background, we have the shrieks, yelps and gibbers of Dadd’s demons.

I would classify Yellow Sands as what used to be called a dramatic feature, the form which I claim in my thesis the BBC invented (through Sieveking’s Kaleidoscope, Pound and Harding’s ballad opera of Villon, and Harding and Bridson’s collaboration in Manchester).  It is the form which, through Bridson’s March of ’45, inspired original radio drama in the US and, later, throughout the Commonwealth.  It is the radiophonic art form – drama which can only exist on radio no matter how many attempts are made to put Under Milk Wood on the stage.

Similarly, I would disagree with Carter about her classification of Puss as commedia dell’arte.  To my mind it is an English burlesque in the manner of Fielding.  It’s great fun, nonetheless.  Personally, I didn’t take to Company of Wolves as a piece of drama (too obviously adapted from another form) but I did find inspiration for my own creative work therein.  Vampirella, a title which promises a gothic version of Barberella, turned out to be quite touching.  But it is Yellow Sands that stands out.  I loved it so much that I read it again, straight away.

I don’t suppose there’s any chance of a revival any time soon, so contemporary aficionados must settle for the scripts.

I might quibble with Carter’s terminology but I wholly endorse her conclusion:

…in its most essential sense, even if stripped of all the devices of radio illusion, radio retains the atavistic lure, the atavistic power, of voices in the dark, and the writer who gives the words to those voices retains some of the authority of the most antique tellers of tales.

2 thoughts on “The radio plays of Angela Carter” 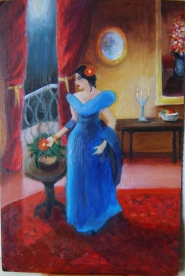